Jaroslav was born in 1884 in Brno. After studying law as his father did at Charles University, Jaroslav became deputy head of the National Worker’s Party. Along with the family paper Lidové noviny he struggled to maintain Czechoslovakia’s independence against the rising German tide. During WWII he was the deputy Prime-minister for the Czechoslovak government in exile, and Minister of Justice as well. Jaroslav was famous for his radio broadcasts from London the Czech nation during the war.

After the war he continued as Justice Minister and was responsible for retributions against the Nazis. He then went on to become Minister of Education and founded Czechoslovakia’s system of Faculty Universities before being forced to flee again for his life, again broadcasting from England to the Czech nation until his death in 1973. In 1991 Jaroslav was awarded in memoriam the country’s highest honor the Order of Tomáš Masaryk for his fight against totalitarianism and communism by president Václav Havel. 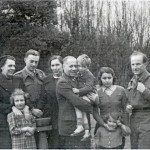 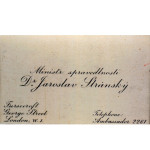 The reason why they had to flee is the reason I had to return.